Just another Monday in Africa 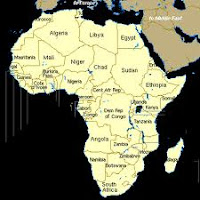 Today I got off to a slow start again. I managed to get to the university a little before 11 am. Before I left somebody from the Adenta Municipal Assembly left a property tax notice. The flat owners owe 168 GH in taxes. I called my land lady and told her and she said to drop it by her old office. She retired from working at the university recently. Then I got a taxi to work since I was ferrying laundry to the laundromat. The university security guards don't let taxis drop passengers off by the main gate anymore so I had to walk a lot more than I anticipated.

After getting to work and dropping off laundry which has recently increased in price from 10 GH to 15 GH I checked my e-mail. I had one rejection from a journal. I need to figure someplace to resend that particular piece. I then called the immigration officer at International House and asked if he was in his office. He was. So I took my passport, a bunch of forms, and $300 US to get my work and residency permit renewed. Shortly after returning to my office the power went out as it does almost every Monday.

Lacking electricity I ate a quick lunch of jollof and cabbage, called my wife in Kygyzstan, and then walked down to a small store to buy some beverages. Then I kept walking down Danquah in the heat until I got to the Kwame Nkrumah Complex and went in to steal cool air from the Institute of African Studies. They have generators and unlimited amounts of diesel to run them unlike the history department which has nothing.

After a while I felt okay enough to make it across the field to JQB and browse in the bookstore. Prices for everything except labor have gotten really high recently. Most of the books were running between 80 and 200 GH which is equivalent to $20-$50. Since prices for everything keep skyrocketing while wages and salaries for the vast majority of the population including university lecturers remain absolutely stagnant the standard of living is dropping fast in Ghana. The middle class is evaporating much faster here than in the US.

Finally, I decided there were no books in the store worth the prices being demanded so I walked back to the history department. On the way I discovered that electricity had returned. It was only out for a couple of hours which is a big improvement from the 24 lights out followed by only 12 hours of power we had for a couple of years here.
Posted by J. Otto Pohl at 8:38 PM