During my absence from the internet I read a  lot about post-colonialism. It seems to suffer from a number of problems as a coherent field and despite reading thousands of pages I still don't grasp exactly what it all means. If all it means is that the damage done to indigenous societies by colonialism did not end with formal independence and that "post-colonial" writers are people staking out a position in opposition to that damage then it is not very useful. Firstly, because while everybody agrees that despite antecedents in the work of Frantz Fanon that post-colonialism only developed in the wake of the publication of Edward Said's Orientalism in 1978. Yet, the idea that colonized societies continued to suffer the effects of colonialism after formal independence and that people in Africa and elsewhere should actively oppose these aftereffects predates Said's work by over a decade. Kwame Nkrumah's, Neo-Colonialism, The Last Stage in Imperialism was published in 1965 to a very negative reaction by the Johnson administration which actively assisted his overthrow in a military coup the following year. Nkrumah's work clearly showed that the economic relations between African countries and their former colonial masters continued to exist to the detriment of Africa despite formal decolonization and nominal political independence. As a descriptive term neo-colonialism in considerably clearer than post-colonialism or postcoloniality. In line with Nkrumah's work the 1960s and 1970s saw a number of scholars unambiguously and critically write about the continued economic exploitation of Africa by the former colonial powers. This was part of a larger intellectual development that saw the emergence of dependency theory, world systems theory, and the concept of underdevelopment. Authors such as Andres Frank, Immanuel Wallerstein, Samir Amin, and Walter Rodney clearly argued that there was a continuing negative effect on international economic structures and patterns as a result of prior colonial rule. Yet with the exception of Robert Young there seems to be almost no acknowledgement of this earlier work by present day post-colonial scholars. Instead these post-colonial writers seem to have largely rejected the central importance of political economy in favor of an overwhelming emphasis on European representative culture, particularly literary culture, as the central problem facing Asia and Africa during the last couple of centuries. Of course Africa itself is greatly underrepresented by these writers who tend to be Indian and like the Palestinian Edward Said professors of literature rather than historians, political scientists, and economists. It seems to me that Rodney was correct in noting that the marginalization and exploitation of Africa was primarily a matter of the imbalance of power between Africa and Europe rather than resulting from any discourse. In other words the negative portrayals, images, and representations of of Africa in Europe and the the US have been crafted to justify inequalities and exploitation imposed by other means. They are not the cause these inequalities in themselves, but rather one of its effects.
Posted by J. Otto Pohl at 12:40 AM No comments:

A comparative look at the numbers in the slave trade

Despite the overwhelming attention paid to it in comparison to the role of Africa, the Middle East, Europe, the Caribbean, and Latin America the US played a comparatively small role in the international slave trade. The Trans-Atlantic slave trade to begin was considerably smaller than the combined Trans-Saharan and Trans-Indian Ocean slave trades. These far less well known slave trades lasted from about 650 to 1905 and totaled about 17 million African slaves (John Ralph Willis, fn. 2, p. x). The much shorter lived Atlantic slave trade saw the arrival of around 10 million surviving Africans in the Western hemisphere during the 16th to the 19th centuries (Polian, table 1, p. 18).Contrary to the impression given by US commentators the number of slaves sent to the US during this time was only a small fraction of these men and women.

The single largest importer of slaves shipped across the Atlantic was Brazil dwarfing the US by a factor of ten. The US ceased importing slaves by 1808 by which time the total number of imported slaves was only around 400,000 or 4% of the Trans-Atlantic slave trade. In contrast Brazil imported over 4 million slaves from Africa or about 40% of the total to survive the Middle Passage (Bergad, 96). In the Caribbean even very small islands imported almost as many slaves as the US. The British shipped 387,000 slaves to tiny Barbados by 1807, almost as many as were transplanted to the US (Kiple, p. 106). Large islands received many more slaves than the US. Spanish Cuba received 780,000 slaves or almost twice as many as the US (Bergad, p. 97).  The Spanish and British imported over 1 million slaves into Jamaica (Eltis, p. 188). Brazil continued to import slaves into the 1850s and only abolished slavery in 1888, twenty three years after the US did. Yet by the 1860s there were some 4 million slaves of African descent in the US versus only 1.5 million in Brazil and 370,000 in Cuba, less than half the number originally transplanted (Bergad, p. 97). In 1834 at the time of emancipation, Barbados had a mere 82,000 surviving slaves or less than a quarter of the number imported. Deaths exceeded births by a constant 4-5% annually on the island from 1676-1725. Jamaica was slightly less deadly with an annual death rate of 3-3.5% above births during the 18th century (Kiple, p. 106). These difference were due in large part to the huge differences in mortality rates stemming from a far better diet in the US (Bergad, pp. 98-100 and Kiple, pp. 117-118). They also stem in large part from the fact that plantation owners growing sugar cane in Brazil and the Caribbean literally worked to death many of their slaves (Bergad, pp. 102-103). The far deadlier conditions suffered by slaves in Brazil and the Caribbean like the very existence of Black slaves outside the US is something that is almost never mentioned by US commentators.

Pavel Polian, Against their Will: The History and Geography of Forced Migrations in the USSR (Budapest: Central European University Press, 2004). 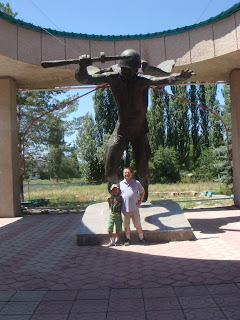 This is a statue of Cholponbai Tuleberdiev who was posthumously awarded the medal Hero of the Soviet Union after sacrificing his life in a battle on 6 August 1942  in order to save the other men fighting besides him. He was only 20 years old.
Posted by J. Otto Pohl at 4:39 PM No comments:

Pictures from my summer vacation in Talas Oblast Kyrgyzstan

Here are two photographs of me taken this summer at the Manas-Ordo Complex in Talas Oblast. 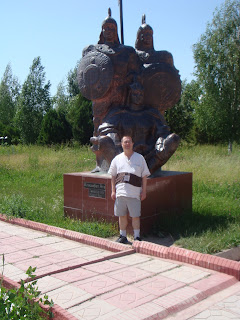 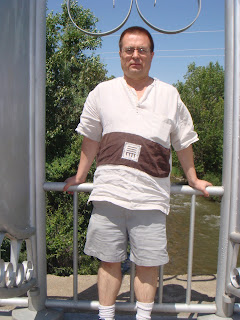 For the last seven weeks I have been without access to the internet so naturally I have not posted anything here recently. I am currently in the Dubai International Airport on my way back from Kyrgyzstan to Ghana. Now that I again have access to the internet posting will resume at a more or less normal schedule.
Posted by J. Otto Pohl at 10:18 AM No comments: