Reports from Moscow are noting that opposition politician Boris Nemtsov has reportedly been shot and killed by four bullets to the chest while out walking. This is the Radio Free Europe/Radio Liberty report on the murder.
Posted by J. Otto Pohl at 1:05 AM No comments:

Most people will remember the late Leonard Nimoy for his iconic role as Spock in the first Star Trek franchise. Indeed, reruns of that show were where I first remember seeing Nimoy's acting. But, I think my favorite Nimoy related show might have been In Search Of one of the very first documentary series on paranormal events. Nimoy was an important cultural figure for those of us who grew up in the 1970s because despite other models of coolness there was no way you could get any cooler than Spock.
Posted by J. Otto Pohl at 10:21 PM No comments:

This is my ethnic heritage on my father's side.
Posted by J. Otto Pohl at 11:56 PM No comments: 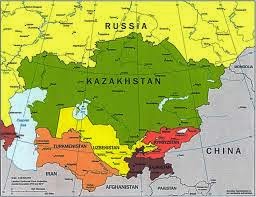 Today is the 71st anniversary of the deportation of the Chechens and Ingush. To celebrate Red Army Day in 1944, the NKVD systematically deported almost the entire Chechen and Ingush populations from their mountain homeland in the Caucasus to Kazakhstan and Kyrgyzstan. There they lived under severe legal restrictions and in dire poverty. As a result of the extremely poor material conditions in their new places of settlement over 145,000 died prematurely before the end of 1952. Only in 1957 did the Soviet government restore the Chechen-Ingush ASSR and sanction the return home of the deportees and their children.
Posted by J. Otto Pohl at 2:50 PM 1 comment:

“Loss, Retention, and Reacquisition of Social Capital by Special Settlers in the USSR, 1941-1961”

I have placed another piece of mine that was published in 2008 on my academia.edu page. The print version appeared as J. Otto Pohl, “Loss, Retention, and Reacquisition of Social Capital by Special Settlers in the , 1941-1961” in Cynthia Buckley, Blair Ruble, and Erin Trouth Hofmann, eds., Migration, Homeland and Belonging in Eurasia ( : and , : Press, 2008). An electronic version can now be found here. Feel to leave any comments you have about the work here.
Posted by J. Otto Pohl at 7:08 PM 1 comment:

I have now put up an electronic version  of "Ethnic Erasure: The Role of Border Changes in Soviet Ethnic Cleansing and Return Migration." The print version appeared in Eero Medijainen and Olaf Mertelsmann, eds., Border Changes in 20th Century Europe, vol. 1 Tartu Studies in Contemporary History (Hamburg, Germany: Lit-Verlag, 2010). The chapter deals with the elimination of the national-territorial units of the deported peoples and their restoration for the North Caucasians and Kalmyks versus the unsuccessful struggles by the Crimean Tatars and Volga Germans to restore their Autonomous Soviet Socialist Republics.
Posted by J. Otto Pohl at 8:21 PM 6 comments: