The Dying of Blogs

At this point blogs seem to be almost obsolete. All the interesting discussion of ideas seems to have migrated to Youtube in the last five years or so. I read very few other blogs now and they seem to have less and less interesting content. I am pretty sure that my audience has been stuck at less than a half dozen people for the last six or seven years. Of course this blog's main function has been merely as an electronic diary for myself for quite some time now.
Posted by J. Otto Pohl at 11:12 PM 1 comment:

My New Year's break is almost over. Tomorrow I go back to work. Besides going up into the mountains I didn't do anything special. I went to the gym to work out a lot. I ate at B to B a lot. At one of my lunches at B to B I witnessed a gun battle on the street below. But, I still have no idea what it was about. Yesterday, I was taking a cab to the park by the bazaar to eat Nepali food when I saw my friend in the car in front of me and he told me to get in with him. Then his car broke down before we reached the bazaar and we ended up taking the bus to the park. Other than that I didn't do much.
Posted by J. Otto Pohl at 12:22 PM No comments:

My article, "Forced Labor in a Socialist State: Ethnic Germans from Kazakhstan and Central Asia in the Labor Army - 1941-1957" is now available on my Academia.edu site. Just click the link on the title of the article.
Posted by J. Otto Pohl at 7:48 PM 1 comment:

Yesterday I went up to the mountains with some Kurdish friends to celebrate the New Year. The green mountains were beautiful. The grilled fish was delicious. The weather was fantastic. Finally, I had a great time. 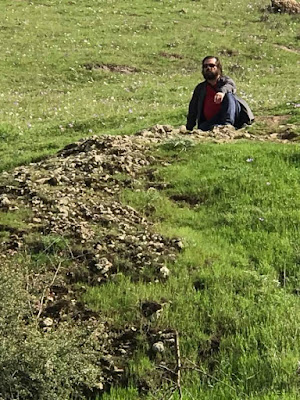 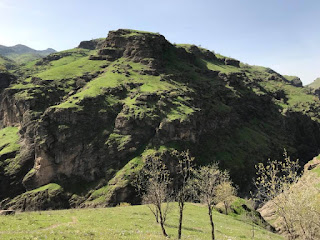 Yesterday, I joined a gym in order to intensify and better organize the exercise my cardiologists have demanded. The coach there wrote me out a weekly exercise plan. I am hoping that this will at least delay for a significant period having to have anymore stents inserted in my arteries.
Posted by J. Otto Pohl at 1:40 PM No comments:

I Now Have Iraqi Residency (good for ten months)

I finally got my residency and work permit sorted out and got my passport back with another Iraqi visa. It is good until the middle of next January.
Posted by J. Otto Pohl at 1:52 PM No comments:

I got my schedule for fall 2018. Like this semester I am only teaching three large classes on Sunday, Tuesday, and Thursday mornings from eight to eleven thirty. This is a reward for getting two articles accepted for publication before July 2018. It doesn't appear that any amount publishing will ever get me promotion here. But, at least it does get me "flexible schedule." Next semester's "flexible schedule" has two CIV 102 sections and one geography class.
Posted by J. Otto Pohl at 4:22 PM 2 comments:

It turns out that today is Raparin Day which is the day the uprising against Saddam Hussein began in Ranya. Which meant that my attempt to do business at the bank today failed since the bank was closed. For some reason our university is the only educational institution in all of southern Kurdistan that does not have the day off. So I was given no indication that today was anything other than a normal work day before I attempted to go to the bank.

Today is also the 65th anniversary of the death of Joseph Stalin. Unfortunately, the despot is more popular than ever. From everything I can see on the Internet it appears that the younger generation in the US is completely unaware of his crimes. But, American university students became a lost cause more hopeless than the Confederacy years ago.
Posted by J. Otto Pohl at 12:33 PM 1 comment:

Yesterday, I graded over 80 quizzes. This morning I have been making progress on another eighty plus. But, I haven't finished the pile yet. I have fifteen minutes left of office hours and so far only one student has come in. Having my office hours from 7:30 to 9:00 in the morning has really cut down on the amount of stress in my life just as my cardiologists ordered.
Posted by J. Otto Pohl at 8:49 AM No comments:

Yesterday, I had a brief video chat with my wife and daughter. Then I took a taxi to the bazaar and walked to the park to buy some Nepali noodles. There was one particularly annoying beggar woman who kept following me around and refused to leave me alone even though I kept telling her I had no money. After she finally left and I was able to finish my noodles, I took a walk through the bazaar and drank some tea.
Posted by J. Otto Pohl at 9:38 AM No comments: