I fly fairly frequently through Istanbul. For the last five years I have flown through Ataturk International Airport from Ghana to Kyrgyzstan and back. Most recently I was in the airport for the entire day of June 8th. I am scheduled to go back through the airport on August 4th.
Posted by J. Otto Pohl at 2:37 PM No comments:

This morning I went to the US embassy to pick up my daughter's new passport. I have now accomplished my most important task of the summer. It was much easier to renew the passport than to get the first one.
Posted by J. Otto Pohl at 3:09 PM No comments: 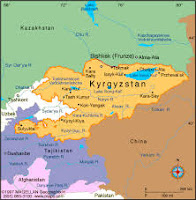 It is strange that the socialist part of the urban landscape of Bishkek remains constant as the capitalist part constantly change. Some businesses have some staying power. Coca-Cola has been here for 20 years and Kyrgyz Concept (a travel agency) has been in existence since 1990 even before independence. But, a lot of the cafes and stores here seem to last only one or two years before being replaced by new ventures. So there are two layers to Bishkek. An older Soviet layer of largely empty or re-purposed buildings and then newer and constantly changing businesses. It is more striking here than other places because very few of the visible symbols of Soviet rule were ever dismantled. The statue of Lenin is still standing behind the History Museum. During Soviet times it stood in front of the museum but other than that it is unchanged. The statue of Marx and Engels that Khrushchev replaced the statue of Stalin with is still just a very short walk away from the Lenin statue. Almost all the sickles and hammers on Soviet built buildings including the old Supreme Soviet which was the campus of AUCA for many years are still up. The 1963 Soviet mosaic on the Ala-Too Cinema is still the same despite showing a never ending parade of Disney movies. In short there has been almost no architectural de-Sovietization in Bishkek unlike other cities in the former USSR. On top of this is all of the new capitalist construction of the last quarter of a century.
Posted by J. Otto Pohl at 6:31 PM 1 comment:

Bishkek is a very walkable city and the various old Soviet era buildings and statues make interesting sights while strolling. Today among other things I saw the statue to the bard Toktogul near the Opera House. Due to his cultural and historical importance during the Tsarist era including his participation in the Andijan Uprising in 1898 (at age 34) it is easy to forget that he in fact lived until 1933, well into the Soviet era. The existing literature, however, largely ignores him after 1917. The English language, A History of Kyrgyzstan (from the Stone Age to the Present) by Oskon Osmonov and Cholpon Turdalieva which came out in 2015 for instance only deals with his life during the Tsarist era and does not say anything about the last 16 years before he died.
Posted by J. Otto Pohl at 2:07 PM No comments:

Yesterday I walked through Ataturk Park and saw the Afghan War memorial. In addition to a statue it also lists the soldiers from the Kyrgyz SSR that died in the war from 1979 to 1989. At rough approximation there were 130 names on the slabs that I saw. But, I think this total must be incomplete. In many ways Afghanistan was the Soviet Union's Vietnam.

Today I walked down the Kievskaya side of Ala Too Square rather than the Chui side. Just after the statue of Chingiz Aitmatov I ran into a former student of mine. He is doing quite well. It is kind of strange to think that I have taught hundreds of Kyrgyz, thousands of Ghanaians, and only a half a dozen Americans. At this point I am sure my impact will be much greater in Africa and Asia than it will ever be in my home country.
Posted by J. Otto Pohl at 12:54 PM 1 comment:

Maybe I should convert this blog into just a listing of various foods and drinks since that seems to elicit the most comments by a huge margin. However, I have already run out of consumables to list for Kyrgyzstan. I suppose I could do a similar list for Ghana when I get back to Africa. Instead, I am just going to keep muddling on in a very random fashion as I always have for lack of any better plan. I wish some of my more academic posts got comments. But, I am pretty sure nobody other than myself reads any of those posts. So there is in fact nobody to comment on them. They exist only as notes to myself in cyberspace.
Posted by J. Otto Pohl at 7:59 PM No comments:

Since my food post got a comment which almost never happens I have decided to add a beverage post. So here is a list of Kyrgyz beverages I have had since I got here. Many of them I purchased from vendors off the street.

The last couple of summers I have done a Kyrgyz food list. That is a list of dishes my wife has prepared for us during my stay. So far I have had the following this trip. Although some of these I had at cafes or as take out.

Most Kyrgyz people don't like spicy food. But, my family is an exception. So having devoured the jar of Vietnamese chili sauce I purchased last week at Beta Stores I went on a hunt for hot sauce this morning with the boy. In addition to getting a new jar of the stuff from Vietnam we also scored and almost completely finished in one sitting of manti a bottle of sweet chili sauce from Russia.
Posted by J. Otto Pohl at 3:35 PM No comments:

Yesterday I submitted the necessary documentation to the embassy to renew my daughter's passport. I also had coffee with a Portuguese colleague. It was the first time I had actually met him in person. He asked that I send him copy of my PhD dissertation which I did later that evening in pdf form. It has been raining here the last couple of days. But, rain in Central Asia is very light compared to the precipitation in West Africa.
Posted by J. Otto Pohl at 4:28 AM No comments:

Like past summers I am currently in Kyrgyzstan visiting family. Today I went to renew my daughter's passport. That was my number one goal to accomplish while I am here. I also finished peer reviewing an article manuscript that had been languishing on my desk for a long time in Ghana. Now I can devote myself to some more serious writing projects.
Posted by J. Otto Pohl at 11:41 AM No comments:

I have been kicking around a project in my head for a while about re-evaluating the relationship of the USSR to the Third World during the 1960s and 1970s particularly with regards to the role played by Central Asia in granting the USSR membership in certain Afro-Asian organizations such as the Afro-Asian Peoples' Solidarity Organization and Afro-Asian Writers' Association. I discussed the idea with Professor Joe on Saturday morning and on Sunday afternoon I wrote 2700 words of a really rough draft. I think there is something there and it is completely different from the other writing I have been doing on Stalinist deportations. It seems to me that nobody has really explored how Central Asia made the USSR an Asian state both politically and culturally in relationship to the rest of the world and in particular with regards to Africa and Asia. But, it seems to me here there are a lot of historical connections and parallels between Central Asia and the rest of Afro-Asia from the late 1950s to the 1980s that have largely been forgotten. The entire Soviet bloc is often excluded from consideration when looking at the Afro-Asian solidarity movements of this era. However, the USSR by virtue of the inclusion of Central Asia in its union was a member and participant in many of the Afro-Asian solidarity organizations and events. Treating Central Asia as part of East Central Europe rather than Asia seems wrong not only geographically but politically and culturally as well. So I want to see if by looking at the involvement of the USSR and particularly its citizens of Central Asian nationalities and its use of cities like Tashkent and Alma-Ata to host Afro-Asian events if I can reincorporate the region into the larger Afro-Asian world. Please feel free to leave any constructive criticism in the comments down below.
Posted by J. Otto Pohl at 10:06 PM 3 comments: