More on the Deportation of the Kalmyks 70 Years Ago 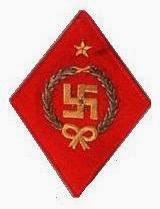 The winter of 2013-2014 marks the 70th anniversary of the deportation of almost all Kalmyks from the Kalmyk ASSR by the Stalin regime. This deportation was a collective punishment of the entire population including women, children, old men, loyal communists, and Red Army veterans. The patch to the right is a Soviet Red Army patch used by Kalmyk soldiers in the 1920s. The swastika  is an ancient Buddhist symbol and Buddhist nationalities in the USSR like the Kalmyks and Buriats were allowed to use it in an official capacity. However, not even service in the Red Army and heroism in the Civil War or Great Fatherland War for the Soviet side saved these men from punishment. They along with their families and the rest of the population were forcibly deported from their homeland to Siberia. Even the Soviet government's own deportation order noted in an oblique fashion that not all of these people, indeed not even a majority of these people were guilty of any crimes. The Ukaz of the Supreme Soviet of 27 December 1943 ordered "All Kalmyks, living in the territory of the Kalmyk ASSR, are to be resettled to other regions of the USSR, and the Kalmyk ASSR liquidated." (Pobol and Polian doc. 3.89, p. 412). Yet the same decree noted only that "many Kalmyks betrayed the Homeland" without providing any kind of quantification anywhere as to exactly how many people the word many represented in this case (Ibid.). None of the deportees were individually charged or tried for any crimes in Soviet courts in clear and direct violation of article 102 of the 1936 Soviet constitution. In reality the total number of Kalmyks to serve in German military units was quite small, about 5,000 men (Chebotareva, pp. 447-448). Almost all of these men managed to retreat with the Germans leaving very few if any Kalmyks who had "participated in German organized military units to fight against the Red Army" (Pobol and Polian, Ibid.) to be deported.  Officially the Soviet government reported deporting 93,062 Kalmyks to Siberia during the winter of 1943-1944. Adult men only comprised 18,982 of these deportees in contrast to 33,895 women, and 40,185 children. Among the Kalmyks punished for "treason" and participating in German military units were twice as many children as adult men. Children were also one of the groups to suffer the highest mortality rates as a result of exile.  The authorities recorded 1,640 Kalmyks dying in the train echelons during the transit to Siberia and another 1,010 being hospitalized. Children accounted for 642 of the deaths while adults aged 16 to 40 (those of military service age) only accounted for 262 (Pobol and Polian doc. 3.97, p. 424). The brutal uprooting of the Kalmyks from their homeland thus had very little to do with punishing anybody for treason and everything to do with punishing an entire people for having the wrong ancestry.

I am glad to see that an accomplished academic is still giving light to the Soviet deportation of minority groups. Too little is known about Stalinist atrocities in the west. I have gathered as much information about the Kalmyk deportations as I could that was published in English.

I am a Kalmyk born in Germany from the refugees of the revolution that escaped into Eastern Europe and emigrated to the US in 1951 at the age of six.

The true stories of our travels and travails are few as many of the elders hid their roles during WWII to be able to emigrate to the US and have since died off.

Please keep up your blog and publications. Your course syllabi and notes have been very useful to me.