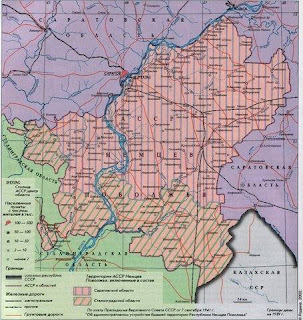 On 7 September 1941 the Presidium of the Supreme Soviet issued a decree dividing the territory of the Volga German ASSR between Stalingrad and Saratov oblasts. This occurred in the middle of the deportation of the Volga Germans from 3-20 September 1941. The map to the right shows the territorial division of the republic between the adjacent oblasts. Below I have translated the decree from Russian into English. Note the transliteration of the canton names from German to Russian and back into Latin letters may result in some differences between my translation and the original German names. But I have tried to confirm and put the original German spellings down below whenever possible.

The Soviet government never restored the Volga German ASSR. Along with the Crimean ASSR it was only one of two national territories at the ASSR level in the USSR belonging to deported peoples that was never reconstituted. The ethnic Germans in the Russian Federation still suffer from inequality and discrimination on the basis of natsional'nost due to their lack of a national territory to protect and promote their rights.