Seventy Years Since the Deportation of the Kalmyks 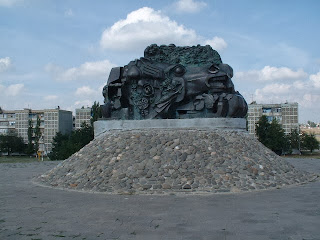 The Kalmyks are a Mongol people living on the steppe just west of the Caspian Sea. They are the only Buddhist nationality in Europe. Tomorrow is the 70th anniversary of Presidium of the Supreme Soviet Ukaz no. 115/144 ordering "All Kalmyks living in the territory of the Kalmyk ASSR are to be resettled to other regions of the USSR and the Kalmyk ASSR liquidated." (Alieva, vol. II, p. 39). The next day the NKVD began the actual ethnic cleansing of the Kalmyks from their homeland to Siberia. In a mere two days they forcibly evicted over 93,000 people from their homes (Bugai,doc. 2, p. 85), mostly women, children, and old men since many young men were still in the Red Army at the front fighting against the Nazis. Deported in the middle of winter large numbers of the exiles died of typhus and exposure during the journey and during the first few years of exile. In Siberia the Soviet government placed the Kalmyks under special settlement restrictions making them second class citizens in the USSR as result of their race. Later the Soviet government decreed these legal restrictions to adhere permanently to the Kalmyks for all eternity. Fortunately, for the Kalmyks the Soviet government under Khrushchev pardoned them and released them from the special settlement restrictions on 17 March 1956 (Alieva, vol. II, p. 59). In January 1957 the Soviet government allowed the Kalmyks to begin returning home to their homeland on the Caspian Sea (Polian, p. 195). By 1959, the percentage of survivors to return home had reached 61.2% of the population  (Polian, table no. 11, p. 198).  The picture in the corner is a monument to the deportation and 13 years spent under special settlement restrictions in Siberian exile.

Polian, Pavel, Against their Will: The History and Geography of Forced Migrations in the USSR (Budapest: Central European University Press, 2004).