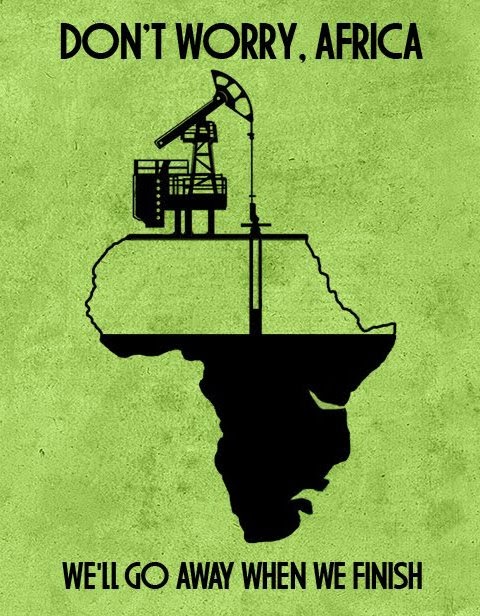 Africa has a lot of resources including oil. But, some of the richest oil producing countries on the continent such as Nigeria, Equatorial Guinea, and Angola also have some of the largest masses of truly impoverished people in Africa as well. For the most part oil revenue in sub-Saharan Africa has not gone to benefit the people living in these states. Instead oil money in Africa has tended to be split between corrupt indigenous elites and foreign, mostly European owned companies. While there is much to criticize about the regimes in oil rich Arab states, many of them have done a much better job than Black African states in using that wealth to benefit their own people. One need only compare the state of most people in Equatorial Guinea  or Angola with that of citizens in Kuwait, Qatar, or the U.A.E. Indeed there is no reason other than the existing and previous corrupt dictatorships for the fact that people in Equatorial Guinea are not as rich as Kuwaitis. People in the west are often far more critical of oil rich Arab states than they are of similarly endowed African states. But, there can be no doubt that almost all of the oil rich Arab states have governments who have done more to improve the social and economic conditions of their indigenous populations using their oil revenue than have any of the oil rich Black African states. The states south of the Sahel would do much better emulating the oil policies of their Arab brothers than continuing their current failed policies of reserving almost all of their oil revenue for foreigners and a handful of indigenous elites.
Posted by J. Otto Pohl at 11:08 PM

For example, you say that a "solution" for Africa is that
oil-rich countries deal with their resources as the Arab oil-states do.

You might be right, but your solution isn't what anyone wants to hear.

Thus, your solution, which, as I said above, may be right for all I know, pleases no one, since the Arab oil states have few fans. They are suspected of financing fundamentalistic Islamic groups, and are criticized for homophobic, sexist and theocratic policies as well as for exploiting migrant laborers from Nepal and Pakistan, etc.

Most people see societies as wholes and don't partialize. So they don't see or don't want to see that a society which treats women and migrant laborers badly may have used its oil resources efficiently in, say, constructing hospitals for its own citizens, etc.

I realize that the Arab oil states may have some merits, but it's not politically correct, on the left or on the right, to point that out.

It may not be politically correct, but the average citizen of Kuwait is living a lot better material standard of living than the average person in Equatorial Guinea. The OAPEC states in general have done a much better job than the oil producers along the Atlantic coast of Africa in using their oil revenues to benefit their population. The U.A.E., Qatar, Kuwait, and even Saudi Arabia do not have the mass poverty that oil rich Nigeria, Equatorial Guinea, Angola, or even Gabon do.

Qatar at least imports workers from Pakistan and Nepal (and maybe other countries) and pays them slave wages. So maybe Qatar's prosperity is partially based on exploiting labor from
other societies.

You are correct Qatar, U.A.E., Kuwait, and even the KSA are dependent to an extent upon imported labor. The Gulf states do import cheap labor that is not treated very well. That is why I was careful to note that the indigenous populations and citizens of these states were well off. That is not the case in the African states. The ruling elites in Angola and Equatorial Guinea exploit and repress their own people not migrant workers. On Qatar specifically one of my friends who is Nepali had a particularly bad experience there.

Does that relative concern for their own people in Arab oil states compared to African oil states have to do with Muslim tradition and/or Muslim values?

I don't think so there are a lot of Muslims in Nigeria.