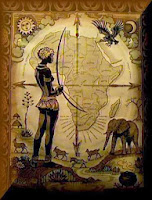 Today I got two letters of recommendation for former students sent off to Europe. Although I didn't get the letters written, printed, and entered into PDF form until after lunch. I had lunch at the Lebanese place at the Marina Mall today with a couple of coworkers. I had the kafta plate. It was a bit pricey (21 cedis including a coke), but not bad. It included hummus, chips with ketchup, salad, and pita bread in addition to the kafta. I wouldn't eat there every month, but as a change of pace from Ghanaian food it was decent. It did fill me up which counts for something.

Update: The sujuk at the Lebanese cafe made one of my coworkers really ill for the last two days straight. I think I will avoid eating there in the future.
Posted by J. Otto Pohl at 2:04 AM