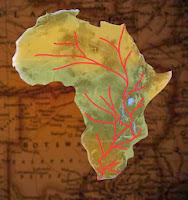 My good friend Walt Richmond has suggested that I include more pieces on African - US and African - European relations. I am not sure if my opinions on these matters are all that novel or interesting. The other day at dinner Marc Becker broached that I was an un-reconstructed dependenista along the lines of people like Raul Prebisch and Andre Gunder Frank who developed the theory in the context of Latin America. With regards to Africa I would say that the term dependency theory is not used much. The term underdevelopment as expounded on by Walter Rodney in his  1972 classic How Europe Underdeveloped Africa is instead much more popular although in many ways it describes the same thing people like Prebisch and Frank were writing about regarding Latin America. There is really a clear intellectual development linking dependency theory, the idea of underdevelopment, and world systems. So one can see how Frank's ideas on Latin American - US relations get applied to African - European relations by Rodney, and then become completely internationalized by Immanuel Wallerstein. All of this stemming from the idea of interpreting international relations as consisting of interests in Europe and the US exploiting countries in Africa, Latin America, and also Asia. Mirsaid Sultan-Galiev was one of the first theorists to fully articulate the idea of proletarian nations including Muslims in the USSR who were exploited by the metropolitan centers of colonial empires. But, after Stalin had Sultan-Galiev executed for his political heresy against the official line of the CPSU the idea went into hibernation. Its revival in the 1960s and 1970s largely concentrated on Latin America and to a lesser extent Africa. I think it largely fits regarding the political-economy of most of Africa. But, these are old and not very exciting ideas. So there is currently not a lot of interest by US scholars today even those specializing in Africa to do in depth research on such related topics as  the history of French neo-colonialism in Africa.
Posted by J. Otto Pohl at 4:54 PM

I think it would be interesting to compare/contrast different colonial strategies and outcomes of French and Germans (and others) in Africa. But Otto would have to travel to Namibia to see what the Germans did to SW Africa!

It would be interesting to compare the African colonial legacies of the French and the Germans (and others). But to do this, Otto would have to travel to some of the other 50 African states. I'm waiting for him to go Namibia to see what the Germans left there!

Allen the Germans were in eastern Ghana which was before 1914 western Togoland and then became British Togoland. I am going to the administrative capital of the region, Ho in January. So I can go to former German colonies without leaving Ghana. Also Togo proper is a lot closer than Windhoek. But, if you want to wire the money into my bank account I am willing to travel to Namibia.