The Deportation of the Volga Germans 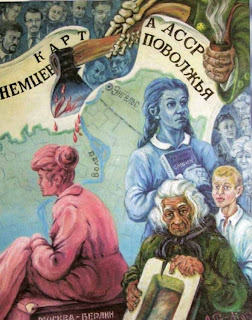 On 26 August 1941 the Central Committee of the Communist Party and the Council of People's Commissariats of the Soviet Union issued Decree No. 2056-933ss ordering the deportation of all Germans from the Volga German ASSR and the neighboring Saratov and Stalingrad oblasts. This order came suddenly without warning and blatantly violated the Soviet and Russian constitutions. This first decree gave no reasons for the mass deportations and remained secret until after the collapse of the Soviet Union.  The next day, 27 August 1941, Beria issued NKVD Prikaz 001158 detailing the measures and instructions for executing this mass ethnic cleansing (Bugai, docs. 9-10, pp. 41-47). The Presidium of the Supreme Soviet issued a second deportation decree on 28 August 1941, Ukaz 21-160, which was published in Nachrichten and Bolshevik in the Volga German ASSR two days later. This second decree falsely accused the entire ethnic German population of the Volga German ASSR, Saratov Oblast, and Stalingrad Oblast of treason without any evidence. This false accusation served as the basis for brutally punishing hundreds of thousands of innocent men, women, and children. The NKVD ruthlessly carried out the deportation of 451,986 Volga Germans to Siberia and Kazakhstan of which 365,764 came from the Volga German ASSR. The names of 2,979 of these exiles have been collected so far. The deportation of the Volga Germans was followed up by the deportation of almost all of the ethnic Germans in the USSR west of the Urals still under Soviet control. Their fate was particularly grim. The Soviet government abandoned them in the extreme climate of Siberia and northern Kazakhstan with insufficient food, housing, and medical facilities with the result that a very large number of them perished prematurely from malnutrition, exposure, and epidemic diseases during 1941-1948.