A Bit of Kurdish History 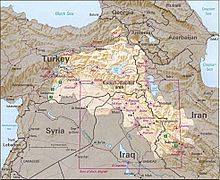 Kurdistan is a nation, but not yet an independent state. The territory of Kurdistan is shown on the map to the right. After the end of World War One the Kurds went from being split between the Ottoman Empire and Persia to being split between Turkey, Persia, the French mandate of Syria, and the British mandate of Mesopotamia. Both Syria and Mesopotamia (Iraq) became independent Arab ruled states that eventually came under the control of political parties calling themselves the Arab Socialist Renaissance (Ba'ath) Party. The Kurds became marginalized minorities in these states. The degree of repression experienced by the Kurds in these states has varied. But, none of them treated the Kurds well. The worst repression came at the hands of the Ba'ath Party in Iraq under Saddam Hussein between 1986 and 1989. The Anfal campaign included the use of chemical weapons by the Iraqi military against Kurdish civilians and killed nearly 200,000 people. The memory of this genocide has become an important part of Kurdish national identity.

After the First Gulf War the Kurds in northern Iraq came under the protection of a US enforced no fly zone. This allowed the KDP (Kurdish Democratic Party) and PUK (Patriotic Union of Kurdistan) that had been fighting against Baghdad to establish control over much of Iraqi Kurdistan. Since then the territory has become an autonomous territory in federation with the Arab part of Iraq as a result of the 2005 constitution. The Kurdistan Regional Government is the ruling political authority of this territory.
Posted by J. Otto Pohl at 9:40 PM