75 Years Since the Deportation of the Volga Germans 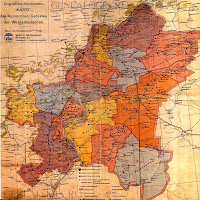 This year marks the 75th anniversay of the deportation of the Volga Germans to Siberia and Kazakhstan where they faced extremely difficult legal and material conditions. The official day of rememberance of this crime against humanity is 28th of August. I have written a lot on this blog and elsewhere about these events. Most of those posts deal with the basic narrative and facts surrounding the deportations, special settlement restrictions, and mobilization into the labor army. For this post I want to do something different. I want to examine why it has  taken so long for this anniversary to be regularly commemorated even by those of us of Russian German heritage and more importantly why it is still almost completely unknown and ignored by everybody else. The standard claim that these crimes were somehow hidden doesn't stand up to scrutiny. The information available since the early 1990s is much greater than that published before the collapse of the USSR. But, the basic narrative has been known since September 1941. Rather there have been other factors at work. First, the Russian Germans have largely been deemed unworthy victims by the intellectual elites of the US and other major powers due to a continued false conflation of all ethnic Germans including loyal Soviet citizens with Naziism. One can understand the use of this lie in the Russian dominated USSR to prevent any return of the land and other collective property forcibly confiscated from the ethnic Germans. Its popularity and in many cases official backing by large numbers of the academic and cultural elite in the US is another matter altogether. Fortunately, this narrative has lost much of the dominance it had as recently as 20 years ago. Deniers and minimizers of the Soviet crimes against ethnic Germans like Deborah Lipstadt and Charles Maier have lost much of the power they had in the 1990s. Most people in the US are no longer content to silently accept the claim that ethnic German children from the Volga deserved to die in Siberia in 1941 because of the Holocaust. This is a huge step forward. But, there can be no doubt that it was largely as a result of genocide deniers like Lipstadt that popular awareness of the deportation of the Volga Germans as an ethnically targeted crime against humanity remained retarded for so long.
Posted by J. Otto Pohl at 9:29 PM

Hi, Otto. Your remembrance "awakens" my family history beginning with the Imperial Russian thievery and the massed deportations, untold deaths, and confiscation of lands and properties of the Germans in Wolhynien in 1915 during WW One. And thank you for all that you have done for us all!

RE: "Rather there have been other factors at work. First, the Russian Germans have largely been deemed unworthy victims by the intellectual elites of the US and other major powers due to a continued false conflation of all ethnic Germans including loyal Soviet citizens with Naziism." I reckon that the persistent falsification of history, official and popular, for a very long time to denigrate those of German ancestry in the US bears examination. First consider the crimes by President Woodrow Wilson and his clique to prepare the US to enter wW I, e.g., the slander of the Hun, the bayoneting of Belgian and French infants, etc.; there's an extensive list of such atrocity propaganda online against ethnic Germans. My grandfather Rudolf Rach and his younger brother Adolf Rach arrived from Wolhynien and settled in their people's immigration magnet, the counties of southwestern Michigan in AD 1900, thus he and his descendants could never be logically equated with Naziism. But what's logic, not love, got to do with it, paraphrasing a popular song. I was born after wW 2, and still as a youth, I was called many ethnic slanders in school, including Nazi when I was unaware of its meaning and connotation, because of my last German name. Dumb Kraut was the least of them. My father (Rudolf Adolf Rach, a namesake for his father and uncle) who grew up speaking solely German until he entered Kindergarten in this country had begun to learn some English words during frequent fights on the way to and from elementary school until he grew stronger and stronger. His class did not receive a bilingual teacher until First Grade. He entirely ceased speaking German anywhere even with his parents when WW Two began for obvious reasons.

RE: "One can understand the use of this lie in the Russian dominated USSR to prevent any return of the land and other collective property forcibly confiscated from the ethnic Germans." Yes, one can understand but never forgive the state-sanctioned thievery, let alone the untold number of dead with ethnic German names. A rightful and lawful return of all lands plus monetary compensation adjusted for the elapsed time to the surviving family members would be a beginning of reconciliation. The Russian government, if it ever wants to be just, needs to stop the celebration of such evil as represented by the Cult of Stalin still in this year AD 2016.

There is a poem that was written in response to the utter destruction of large tracts of the German homeland before. Perhaps it would be appropriate to issue it in commemoration of the anniversary of the horrors of the 28th of August 1941:

"Tears of the Fatherland by Andreas Gryphius (1616-1664) (in translation into English):

Full now, yea, more than full, behold our devastation:
The frantic drum beat, and the brazen horde,
The thundering siege gun, and the blood-slick sword
Devour all diligence, and sweat, and careful preparation.

The church is overthrown; our mighty men are slain;
The town hall lies in dust; our towers burn;
Virgins are raped; and everywhere we turn
Are fire, plague, and death to pierce us, heart and brain.

Down walls and through the town runs always fresh-spilled blood
For eighteen summers now, our river’s yearly flood
Near-choked with corpses, has pushed slowly, slowly on

But nothing will I say of one thing worse, I know,
Than death, more grim than plague, or fire, or hunger’s woe:
Those pillaged souls from whom even hope of heaven is gone."

I encourage those who can to read it in the original German.

I deleted the balance of my reply due to exceeding the specified length.

Thank you for this information and for sharing this poem.