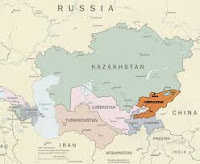 I pretty much failed to convince anybody that the Asian Studies Centre should have all of Asia as its mandate rather than just China, Japan, South Korea, and a separate Chair for India at the Academic Board meeting today. That is because these are the states whose governments have provided or promised funding to the university. But, I may have convinced the administration that they need to change the name of the institute to the Pacific Asian Centre in order to permanently exclude the study of Central Asia. Ironically, while they don't want to include much of actual Asia as a subject for study since their government's haven't coughed up any money they are okay with including Australia. They figure the Australians unlike the Uzbeks, but like the Chinese, South Koreans, Japanese, and Indians can be convinced to give money. Any pretense of doing anything for scholarship rather than money has permanently dissapeared here.
Posted by J. Otto Pohl at 4:53 PM

Indeed, the Asian Studies scope and curriculum need be reorganized. Central Asia is a very important and interesting region and cannot be excluded.

I regret that the authorities are always so mercenary. It seems as if handouts rule while academic research is the poor stepchild at university. Perhaps they should rename their moneymaking racket instead the Donor Asian Studies? But thank you for trying your utmost!

Would it actually cost them anything to include Central Asia?

To include Central Asia in the proposed mandate would cost absolutely nothing.

You should say so, if you haven't already ...

I did, but it is not enough for them that it not cost any money. Everything must now generate money on its own for the university. So they refuse to include any countries in the mandate whose governments have not given or at least promised funding to the university. I am now going to go to the Dean to see if he can issue a formal written appeal to the Provost on behalf of the College of Arts on this matter.