74 years since the deportation of the Volga Germans 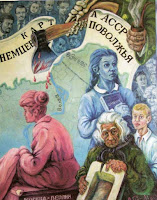 Today marks the official commemoration of the deportation of the Volga Germans and later other communities of Russian-Germans to Siberia and Kazakhstan. On 28 August 1941, the Presidium of the Supreme Soviet issued Ukaz 21-160 providing the legal basis for the decision to deport the ethnic Germans of the Volga German ASSR, Saratov Oblast, and Stalingrad Oblast made by the Council of People's Commissars and Central Committee of the Communist Party two days earlier. Nevertheless, the legal cover of the decree by the Presidium of the Supreme Soviet and other decrees pertaining to the deportation of the Volga Germans and the liquidation of the Volga German ASSR clearly violated the 1936 Soviet and 1937 RSFSR (Russian Soviet Federated Socialist Republic) constitutions not to mention the constitution of the Volga German ASSR itself. This forcible dispersal of the Volga Germans across the eastern regions of the Soviet Union ended over 150 years of continuous settlement by ethnic Germans in the region. The Soviet government sought to permanently erase their former presence from the region. Lack of proper clothing, housing, food, and medical care led to mass mortality among the deportees. Subsequently the Soviet government mobilized most able bodied adults among the Russian-Germans for forced labor in the labor army.  The Stalin regime placed the remaining deported Volga and other Russian-Germans under special settlement restrictions resembling the later apartheid laws of South Africa. These discriminatory restrictions on their mobility and residency were initially supposed to be permanent, but were finally repealed at the end of 1955. The deportees and their descendants, however, were never allowed to return in large numbers to their former places of residence in the Volga and elsewhere and the vast majority of the Russian-German population remained confined to Kazakhstan, Central Asia, and Siberia until they emigrated to Germany after 1987.
Posted by J. Otto Pohl at 1:22 PM

Hello: I am someone else who happened across your blog recently and find it enlightening on a number of topics. You do a great job of encapsulating summaries of great sagas in one short page. My greatgrandparents left their Volga German village in the 1870s, as soon as Russia began its crackdown on the population there. Naturally, they had many relatives who remained. Probably some were unable to make the voyage to North or South America. It would naturally be hard to leave behind farms and animals and elderly parents and so on. Anyway, those with our family name (all related to the family by the same name who came to Russia from Germany in the 1760s) who did not leave in the 1870s are not too difficult to trace because of the unusual name. Some eventually went to Canada in the early 1900s. Of those who were sent to Siberia, many now live in Germany, as I'm sure you know. They were able to get out of Siberia about 40+ years later. Last year, one of them visited my city in Minnesota; I thankfully got the word in time and was able to meet him and listen to him give talks to various groups about his family's life in Siberia and his current work as a Lutheran pastor back near our original village in Russia. I am glad to have found your blog and look forward to discovering more insightful writings here.

Great article. I believe most of my family at least on my grandmother's side, left the Volga prior to Stalin.

Thanks for commenting here Margaret and Trish.