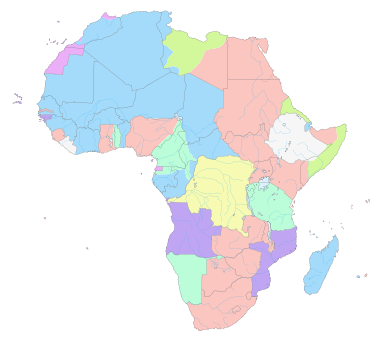 The map to the right is of Africa under colonial rule from 1886-1914. What is interesting is just how few European countries got in on dividing up Africa. Most of Africa was under either British or French rule. Germany had for a short time, only 30 years in the case of Togoland, four colonies on the continent. Portugal had Angola, Mozambique, and three much smaller colonies for a much longer time. Italy only had Somalia, part of what becomes Libya, and Eritrea. Finally, Belgium had Congo and Spain had Western Sahara, and the enclaves of Spanish Morocco and what is now Equatorial Guinea. The Netherlands, Austria-Hungary, Denmark, Sweden, Russia, Greece, and the Ottoman Empire all had no African holdings at this time. Although previously the Dutch and Danish had been heavily involved in the slave trade out of Africa, much more so than the US ever was. There were never any US slave castles like the Dutch had at Elmina and the Danish at Christiansborg anywhere in Africa. No non-European powers ever had any African colonies. For the most part the political subjugation of Africa to colonial rule was an affair of the British and French.
Posted by J. Otto Pohl at 2:41 PM

Maybe South Africa on Namibia was an example of African-on-African colonization, but that was white-ruled South Africa. And Morocco on Western Sahara probably doesn't count because northern Africa is part of the Middle East.

In America it's popular among some people (mostly the ones who are part of some backlash against "identity politics") to claim that African-on-African enslavement was a thing over a large portion of African history. I'd be curious what's your take on that?

South Africa conquered Namibia during WWI from the Germans who are shown as controlling it in this map. Morocco took Western Sahara when Spain withdrew in 1975. One could also add Ethiopia's annexation of Eritrea in 1962. But, I was trying more to get at the fact that the much maligned US did not in fact establish colonies in Africa.