Bloodlands and other Readings for Hist 435 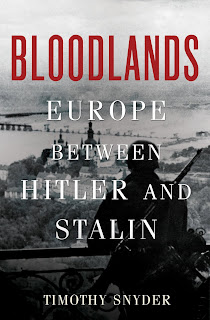 This semester I am teaching Aspects of World History, 1914-1945 again. As in semesters past I am assigning Robert Gellately, Lenin, Stalin and Hitler: The Age of Social Catastrophe (London: Vintage Books, 2008) as the main text for the class. In addition I am also assigning Timothy Snyder, Bloodlands: Europe Between Hitler and Stalin (London: Vintage Books, 2011) to more fully cover the history of the territory between Moscow and Berlin. I am also assigning six journal articles up from four last year on various aspects of Stalinist repression to fill out the outline presented by Gellately and Snyder. I think together Gellately and Snyder do an adequate job dealing with the Holocaust and other aspects of the history of Nazi Germany, so I don't have any additional journal articles to assign dealing with that part of the class.

I am adding the Snyder text to the class in response to suggestions I received a couple of years ago when I first started teaching the course. Because it covers a greater chronological and thematic expanse I opted instead to assign the Gellatley text. This year, however, I have decided to assign both texts which will bring the reading load for students up to about 100 pages a week. I am told this is a normal amount of reading for a 400 level class.

The six additional articles I am assigning to the class are listed below.