Africa not Moscow, Havana, or Beijing 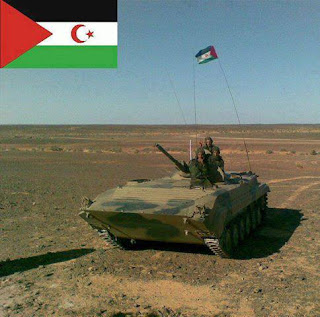 Western Sahara is the last unresolved colonial conflict in Africa. In 1975 when Spain withdrew from the territory it became occupied by Morocco in opposition to the wishes of the vast majority of the indigenous population (Zunes, p. 35). The Moroccans took over the colonial role of Spain in Western Sahara much as Indonesia did for Portugal in East Timor around the same time. Despite their small numbers the Sahrawis were able to launch and sustain an impressive military and diplomatic resistance to Moroccan rule during the 1970s and 1980s. The Moroccan occupation forces have been quite brutal in their suppression of opposition to their rule.

Both the military and diplomatic resistance of the Sahrawis to Moroccan rule has been quite different politically from most national liberation movements in Africa and the greater Arab world. The political-military movement to liberate Western Sahara from Morocco is known as the Polisario (The Popular Front for the Liberation of Saguia el Hamra and Rio de Oro). The government established by the Polisario in the liberated areas of Western Sahara is the SADR (Sahrawi Arab Democratic Republic) (Zunes, p. 34). The Polisario has very little ideology apart from a desire to liberate the land of the Sahrawi people, a commitment to participatory democracy, and a "Third World" orientation particularly towards Africa and to a lesser extent towards other Arab states (Zunes, pp. 37-42). Unlike almost all other national liberation movements of the 1970s and 1980s in Africa such as the MPLA, FRELIMO, ZAPU, ANC, and SWAPO they did not closely ally themselves with the socialist bloc. In fact the Polisario never directly received any arms from the USSR, the Warsaw Pact states, Cuba, or even China (Zunes, pp. 43-44). The only European states to recognize the SADR were Yugoslavia in 1984 and Albania in 1987. (Pazzanita, p. 272).  The Soviet bloc in contrast maintained good relations with Morocco, the Soviet Union being in the 1980s Morocco's largest trade partner and Romania providing weapons to Rabat (Zunes, p. 43). Other suppliers of arms to Morocco have included the US, UK, France, Israel, apartheid South Africa, and Saudi Arabia (Bhatia, p. 292). The pro-Soviet Moroccan Communist Party was always a strong supporter of Morocco's conquest of the Western Sahara (Zunes, p. 44). Instead the Polisario and SADR found their strongest support among African states. The SADR gained membership in the OAU  (Organization of African Unity) in 1984 and had achieved diplomatic recognition from 74 states by 1990 (Pazzanita, pp. 271-272). These states included 27 in Africa and 14 in Latin America (Zunes, p. 42). Arms and logistical military support for the Polisario came mostly from Algeria with some support in the 1980s from Libya (Bhatia, p. 292). Thus the Polisario and SADR had a clear orientation towards non-aligned African and Arab states rather than the USSR and its allies in East Central Europe and Cuba.

The lack of attention paid to the plight of the Sahrawis and their national liberation front in North America and Europe is in part due to their lack of a Marxist-Leninist ideology and alliance with the USSR. Their African rather than Soviet orientation did not connect them with the global left in the industrialized North and instead left them isolated from the type of support groups like the ANC could mobilize on their behalf. At the same time their lack of connections with the USSR did nothing practical to help them in the eyes of the US which strongly backed Morocco in Western Sahara despite the fact that Moscow showed absolutely no interest in supporting the struggle of the Polisario. Nonetheless, the Pan-Africanism of the Polisario did garner them the support of most of the membership of the OAU showing that African states could act independently of the superpowers.