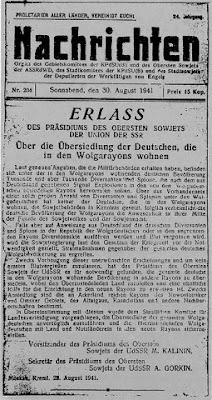 The twenty eighth of August marks the official day of commemoration of the deportation of the Russian-Germans. On 28 August 1941, the Presidium of the Supreme Soviet ordered the deportation of the Germans living in the Volga German ASSR, Stalingrad Oblast, and Saratov Oblast. This decree received the numerical designation Ukaz 21-160. Clicking on the link will bring you to an English language translation of the decree. The decree was published two days later on 30 August 1941 in both the German and Russian language newspapers of the Volga German ASSR. In the top right corner you can see a photocopy of the German translation published in Nachrichten and right below it you can see a photocopy of the original Russian as it appeared in Bolshevik. Ukaz 21-160 was the only deportation order dealing with the Russian-Germans that was published at the time it was issued. The few previous and many subsequent deportation orders ethnically cleansing the Soviet Union west of the Urals of almost all of its citizens of German ancestry did not see the light of day until decades later. 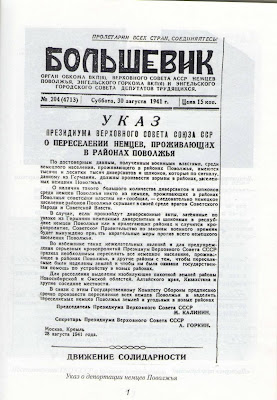