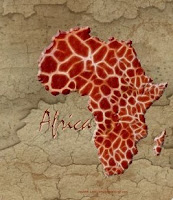 Yesterday I couldn't post this because the power went out again. So I am posting it today. But, the events all refer to Wednesday. At 9:30 am I oversaw our last departmental seminar of the semester. We had a guest lecturer from Winneba talk about pedagogy today. This provoked a lively discussion among the National Service Personnel in the audience, most of whom had been students just a year ago. This was followed by another emergency meeting in which I got stuck being seminar coordinator for next year. In fact they named me seminar coordinator for life. But, I did get rid of my seat on academic board after two years finally.

I then finished up grading my mid-terms for European history, ate some waakye provided free by the head of department, and took a walk. After that I called my wife and spoke to my five year old daughter. Her Russian has gotten really good. It is her second language. Her first language is Kyrgyz which I don't speak very much of at all. She even threw in some English phrases for my benefit. She asked about her grandparents a lot.

The rest of the afternoon I spent doing minor tasks that took way too long. One was writing a reference letter for a former student applying for funding for graduate studies. The letter itself did not take long to write. However, getting the printer to work took a long time. I had to reinstall the HP printer program because I updated to Windows 10 a while ago.

The second task I still have not finished. I am searching for a suitable journal to send a revised version of the paper I presented in Jerusalem. I originally sent it to The Russian Review but they rejected it on the basis that they had just published an article by me on ethnic Germans in the USSR during World War II which is fair enough. So far I haven't decided on where to resend the manuscript. Any suggestions are greatly welcomed and should be included in the comments.
Posted by J. Otto Pohl at 7:34 PM

RE: "After that I called my wife and spoke to my five year old daughter. Her Russian has gotten really good. It is her second language. Her first language is Kyrgyz which I don't speak very much of at all. She even threw in some English phrases for my benefit. She asked about her grandparents a lot." The world looks quite large in the eyes of a five-year old. I remember raising my daughter and experiencing the wonder of things. Maybe you can help her learn English and she could help you to learn Kyrgyz? Five years old is such a sweet and innocent age. May God richly bless her and instill an abiding love of learning, reading and discovery!

All university students here are required to do a year of national service after they graduate. Those wanting to go on to graduate studies often do their service in a university department. They are paid by the government through a separate scheme.