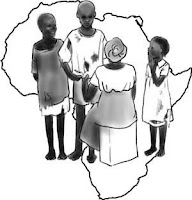 Today I had to get up early to teach my 7:30 am class on the Cold War and return their mid-term exams. I covered the late Cold War period with an emphasis on the Soviet war in Afghanistan today. Next week is the last lecture where we cover the end of the Cold War the the break up of the USSR into its component republics. When I got back to the office the department head had a free meal of jollof rice, chicken, and fried plantains for me. It was an unexpected gift. But, it was mighty tasty.

Most of the afternoon I spent at the library going through university archives as part of a departmental project. I came across over 100 documents on how the university administration denied any funds for hiring new staff or promoting old members in the faculty of the sciences from 1966 to 1973. In 1968 the dean began a concerted effort to have this situation reviewed and funding provided for promotion and new hires. Only after they began to lose all of their science faculty and technicians to other institutions due to the lack of promotion at Legon did the administration finally relent and agree to provide funding to give raises. That was in 1972. The following year they funded the hiring of new people in the faculty of sciences for the first time in eight years. The sixties and seventies are  often portrayed as a golden age for higher education in the US. But, in Ghana they certainly were not.

I then returned to the office and wasted time talking to national service people and graduate students for about an hour. After that I noticed the food lady outside and picked up some ground nut soup, chicken, and rice. Interestingly enough I eat a lot more rice in Africa than I did when I lived in Asia. There I ate a lot more bread than I eat here.
Posted by J. Otto Pohl at 12:54 AM