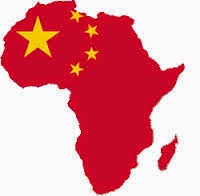 Communism was an international movement and the Soviet government made an effort to support revolutionaries in the colonial world. Although, the limited nature of Soviet material assistance and the effectiveness of colonial repression severely hampered these efforts, they did have some success, particularly in Asia. The greater distance, lower level of aid, and more effective repression of communist movements by the European powers in Africa meant that by the time most African countries received independence that there were very few major communist movements on the continent. The one large communist party in Africa in the 1950s and 1960s was the Sudanese Communist Party.[1] It owed its strength to the fact that it was the only political party in the country that crossed racial and religious boundaries to have strong representation from both the north and the south of Sudan.[2] But, in 1970 the Sudanese government thoroughly crushed the Communist Party and executed its leaders.[3] In contrast by 1954 communist governments had been established in Mongolia, North Korea, China, and North Vietnam. Large and powerful communist movements also developed in Indonesia, the Philippines, and Malaya. Nonetheless, Africa was not completely devoid of communists during the colonial era. The Sudanese Communist Party founded in 1944 has already been mentioned.[4] There was also an organized, although predominantly white communist party in the Union of South Africa. Other regions of Africa, however, were also not immune from communist agitation. There were individual communists active in British West Africa including the Gold Coast despite harsh colonial repression. The history of the international communist movement in the Gold Coast, however, still remains largely unwritten. This article is a first attempt at rectifying this lacuna and integrating West Africa into the history of the world communist movement during the 20th century.

The 1930s saw the embryonic development of a communist movement in the Gold Coast. It centered around Isaac Wallace-Johnson and Bankole Awooner Renner. The first of these two men was from Sierra Leone and he worked in the Gold Coast only briefly from 1933-1936 following his deportation from Nigeria until he left to go back to his home country. Both Wallace-Johnson and Renner had been students of KUTV(Communist University for Toilers of the East) in Moscow and in 1935 they founded the Marxist West African Youth League in the Gold Coast. Wallace-Johnson had been active along with George Padmore in the International Trade Union Committee of Negro Workers (ITUCNW), a communist trade union for Blacks around the world established by the Profitern in Hamburg Germany in 1930. The ITUCNW published a newspaper by the name of the Negro Worker which circulated in the British West African colonies.[5] At this time there was no Gold Coast Communist Party separate from the British Communist Party.

The KUTV was founded in 1921 and played an important role in providing ideological training for African communists. Initially the university only received students from Asia and the Middle East, but starting in 1923 a few Africans began attending the institution as well. One of the first Africans to enroll in KUTV was Bankole Awooner Renner from the Gold Coast. Renner had become a communist while studying in the US and went to continue his studies at KUTV in November 1925. While at KUTV Renner raised the issue of Soviet policy towards sub-Saharan Africa both in person and in writing with Zinoviev, but was never able to get any type of substantial answer.[6] The Soviet government's policies towards Africa remained in an undeveloped state throughout the 1930s and 40s.

After attending KUTV it appears that Wallace-Johnson and Renner had some contact with each other in the League Against Imperialism (LAI). Founded in 1927 in Brussels this Soviet front group sought to support communist movements in the colonial world, particularly in India. It seems that Wallace-Johnson was operating under the name of A.E. Richards at the time and was secretary of the LAI for West Africa. But, overall the LAI's influence in British West Africa was quite limited. It had far more success in French West Africa.[7] The ITCUNW proved to be a more effective instrument of communist agitation in the Gold Coast than the LAI.

In response to the formation of the LAI and activities of the Comintern the British colonial authorities in the Gold Coast passed the Sedition Bill in 1934.  This bill was to ban the entry into the colony of people deemed subversive. Among those fitting this description were people associated with the Communist Party, ITUCNW, LAI, and the Profitern. The Inspector General of the police named four men he considered to be especially dangerous subversives. These men were Essuman Gwira Kobina Sekyi, Benjamn Wuta-Ofei, Alfred John Ocansey, and Emmanuel K. Caeser. Among Sekyi's contacts in the above mentioned subversive organizations was Wallace-Johnson. Both Renner and Wallace-Johnson were prominent in the Gold Coast press and political organizations such as the West African Youth League and Friends of Ashanti Freedom Society.[8] Wallace-Johnson's journalistic criticism of the colonial regime in the Gold Coast especially upset the authorities. On 1 June 1936, he was arrested for violating the Sedition Act.[9] Although convicted, Wallace-Johnson only received a 50 pound fine. In March 1937 Wallace-Johnson left the Gold Coast and did not return until after Ghana had received its independence.[10] However, communism as a movement lost out to the Pan-Africanist aspirations of Nkrumah and the Convention Peoples Party during most of the first decade of independence. The 1930s in fact like in many other places represented a high point for the communist movement in West Africa.