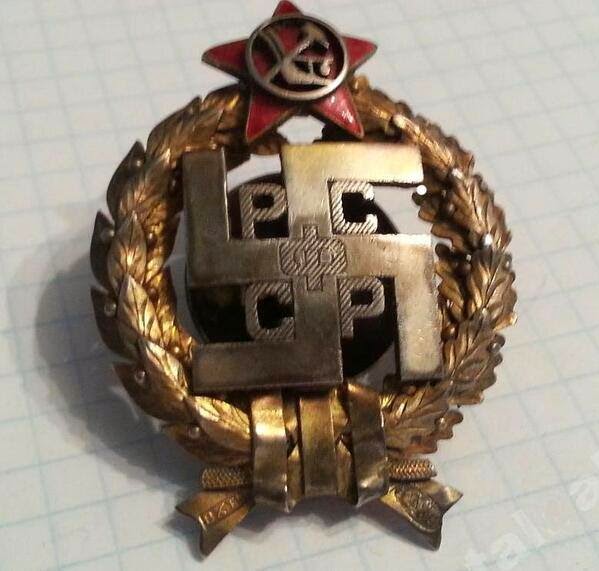 This a Soviet military badge for Kalmyks from the Russian Civil War. The hammer and plow at the top as well as the swastika in the center show that this particular insignia was used sometime between 1919-1922. The hammer and plow was replaced by the hammer and sickle in 1922 in the Red Army, but I do not know when Kalmyk and Buriat units were no longer allowed to use the swastika. I am guessing that it was outlawed sometime during the anti-religious campaigns of the early 1930s since the swastika is most definitely a Buddhist religious symbol. So here we have an early Soviet military badge combining the old hammer and plow with the Buddhist swastika along with a red star, wreath, and the letters RSFSR (Russian Soviet Federated Socialist Republics).
Posted by J. Otto Pohl at 2:30 AM

Great post. You would probably enjoy the following post too because your swastika image ties into the work of the symbologist Dr. Rex Curry, who showed how the swastika was used to represent crossed "S" letters for "socialism" under the Union of Soviet Socialist Repubics and under the National Socialist German Workers Party. http://pledge-of-allegiance.blogspot.com/2014/03/swastika-of-soviet-socialism-russia-led.html

The swastika was also used on early paper money used under the USSR. http://rexcurry.net/ussr-socialist-swastika-cccp-sssr.html